Nil Battey Sannata actress Swara Bhaskar is one of the few actresses in the tinsel town who’s not known as the leading actress but her performance speaks a lot about her character. The actress is all set to again impress her fans with her upcoming film “Anarkali of Arah”.

Yesterday morning the filmmaker Karan Johar disclosed the poster of Swara Bhaskar’s film and no doubt she looked so elegant in the poster. While everyone was busy complimenting her looks on the other side self –proclaimed critic Kammal R Khan as usual gave his ugly remarks for the film. It looks that Kaamal R Khan didn’t like the first look of the film and therefore he directly commented about the film’s collection.

KRK Trolled Swara Bhaskar But Got Epic Reply From the Actress

“Well done @ReallySwara for constantly breaking ground!! 24th march is the date guys ! For this new world and engaging film!!! ” 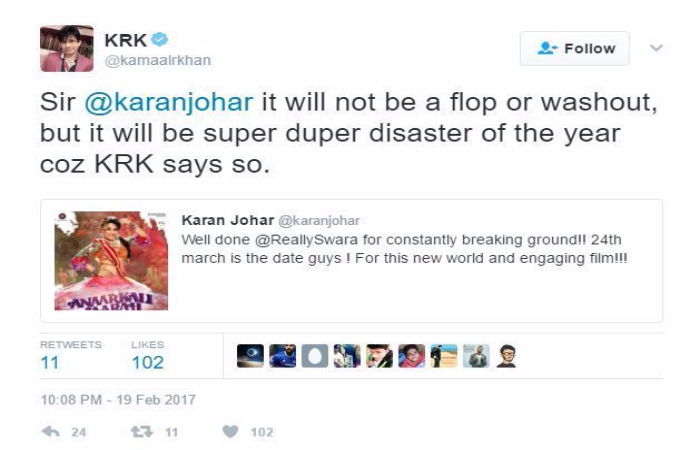 Well after this she didn’t go down in fact, Swara lashed him back with another super tweet saying –

Kuch logon ki gaali, compliment hoti hai! Thanks @kamaalrkhan the unasked filth u spew is a character certificate for us! Appreciated.

We absolutely love the way how she confidently tweeted back. As usual,  Kamaal R Khan tweeted back to her –

KRK tried trolling Swara Bhaskar but ends up getting an excellent response from the audience too.

Anaarkali of Aarah is all set to go on the floors by 24th Feb 2017. We hope that just like Nil Battey Sannata, she would impress her fans once again with this new avatar.