No, it’s not at all surprising news. We all are aware how Kamaal R Khan leaked a phone conversation at the time of Ae Dil Hai Mushkil and Shivaay and thus created a distance between KJohar and Kajol. Really KRK played very dirty and everyone just believed that KJohar bribe KRK to sabotage Ajay Devgan’s Shivaay.

Thankfully, the case is not the same this time. Kamaal R Khan didn’t leaked any of Amitabh Bachchan’s message on Twitter, he just proved the fact that how Big B believes in him. Can you just believe it?

Yes, Kamaal R Khan just shared a screenshot of a message that he got received from Mr. Bachchan, on 31st Jan 2017, that reads - You have become the barometer of the box office. Hoping that this prediction comes true.

KRK is a big Chu**ya – Mr. Khan Gets Hilariously Trolled on Twitter

But, still if you are thinking that this might be KRK’s trick to get involved in any of the cases, then you are absolutely wrong. Mr Bachchan replied to the tweet that reads as –

this is was my response when KRK saw trailer of Sarkar 3, liked it and predicted it to be a HIT !! let's hope so !!?? 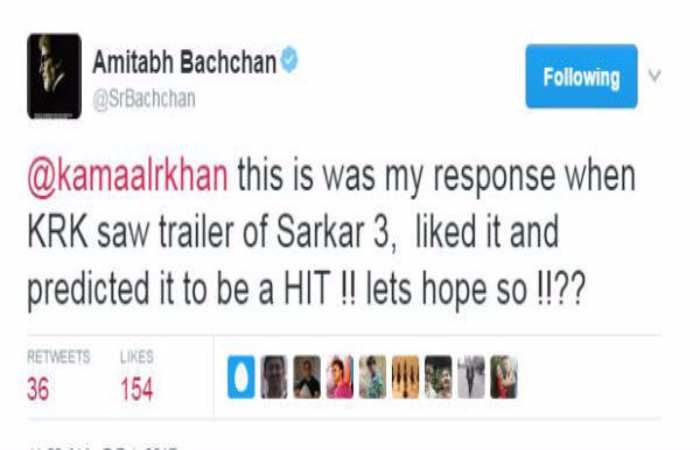 Undoubtedly, Amitabh Bachchan is super excited about Sarkaar 3. And the good news is that the recent conversation between the two has given us the hint of Sarkaar 3 trailer, it might be releasing shortly then….

Hindsight, what you have to say about their mutual love?

This 90’s Actress is Making Her Big Comeback with Ranbir Kapoor!