Bollywood bubbly girl Parineeti Chopra’s new avatar became the mere talk amongst the social media as the actress posted her slim pics on Instagram.  We haven’t seen the actress for so long on big screens, but recently Parineeti Chopra posed beautifully for the Bridal Mantra Magazine for October-December 2015 issue. Previously also the actress became the cover girl of number of magazines, where she was caught embroidering her sensuous figure.

Bollywood diva Parineeti Chopra while donning the blood red coloured beige dress of a floral print with a simple mang tikka and outsize red coloured bindi is been looking as the stylish bride with a snazzy outfit. The beautiful costume for the same was designed by the famous designer Manish Malhotra.Mang Tika and a broad bindi are adding a traditional touch to this modern bride. 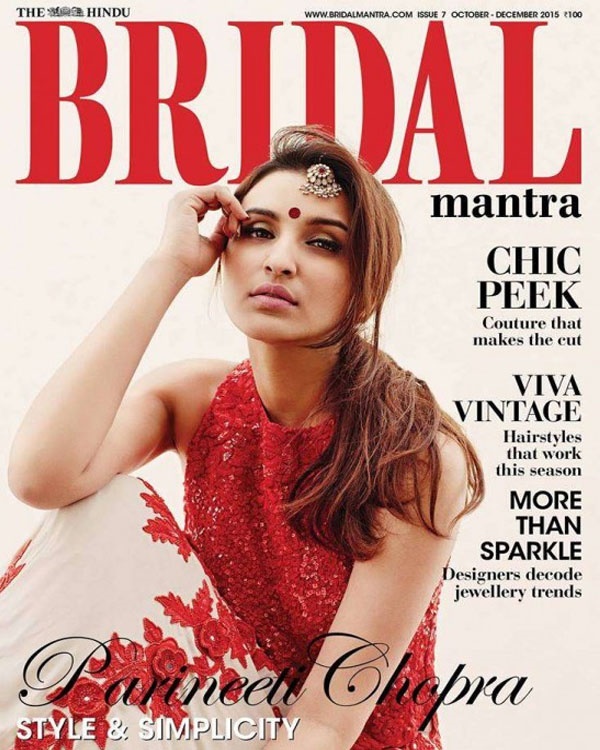 Talking about her hairdo, the hairs are kept loose with a simple pony and with a light makeup by Mrs. Anita Dongre the cutest diva of the tinsel town is shining on the front cover of Bridal Magazine. Again the actress is proving her winning personality. An insight of the magazine covers different hairstyles for the season and the jewellery trends.

Rumors buzzed for Parineeti Chopra Upcoming Movies that she will be seen next as wife of MS Dhoni in Dhoni’s biopic but the news is not confirmed yet by the source. Pari your fans are eagerly waiting to see you back on silver screens. Let just wait for the media to cover the next news about her, till then you guys enjoy her traditional yet modern avatar on Bridal Mantra Magazine for October –December 2015 issue.

In Pictures! Dia Mirza the Most Beautiful Bollywood Actress

Kajol in Saree: Beautiful Photos from the Collection