Director Nikhil Advani has revealed the first look of his upcoming movie 'Katti Batti', featuring the unconventional pair, Kangana Ranaut and Imran Khan. The story of the film is not an average love story; in fact it’s rather unusual. The whole story revolves around the topic of live in relation and its complications. This style of story has never seen projected before on Indian celluloid.

Kangana Ranaut to Play an Unmarried Mother in ‘Katti Batti’

‘Gangster’ diva Kangana Ranaut is going to perform for first time with Aamir Khan's nephew Imran Khan in her upcoming Bollywood movie 'Katti Batti'. Kangana Ranaut will be playing an unmarried mother Payal, while Imaran khan will be essaying the role of Maddy.

You may also like: Exclusive: B-Town Couple Hrithik and Kangana Tying a Knot in 2015? 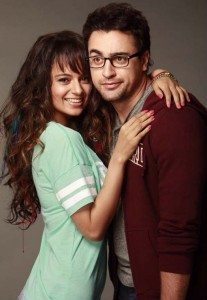 Kangana says, “It is a very good love story. It is different from the usual love stories that we get to see in Bollywood films. The element of love has been depicted in a different way in that film. The film’s idea and philosophy is very good.”

The first look of the film 'Katti Batti' depicts Kangana and Imran, both looking extremely cute. Kangana wore a green top while Imran is in casual wears in the first revealed pics of the film. Payal is a modern and independent girl belonging to a Delhi based wealthy family. On the other hand, Imran is a middle class boy who lives in Pune.

You may also like: Imran Khan on Nasir Hussain’s Movie Marathon

The movie is slated to be released on 18 September, 2015. Currently Kangana Ranaut is working in three Bollywood project including ‘kitty’, 'Divine Lovers' and 'Tanu Weds Manu 2', while Imran Khan is making a comeback with ‘Katti Batti’ after a long break!

Get more updates about 'Katti Batti' movie from Bollywood news.