Pakistani actor and surely the leading infatuation of the B-town industry Fawad Khan is enthroned with a dashing personality and charm. Fawad Khan who is the newbie in the Bollywood industry or we can say he is just one film old has become a popular face in the cinema and is now shining as the cover boy for Filmfare Magazine.

On the black and white cover page of the Filmfare Magazine Fawad can be caught once again posing intensely with the spicy look. On the cover page of the journal it has been titled for him as –“The Cross border turk who is giving our heroes sleepless nights”. 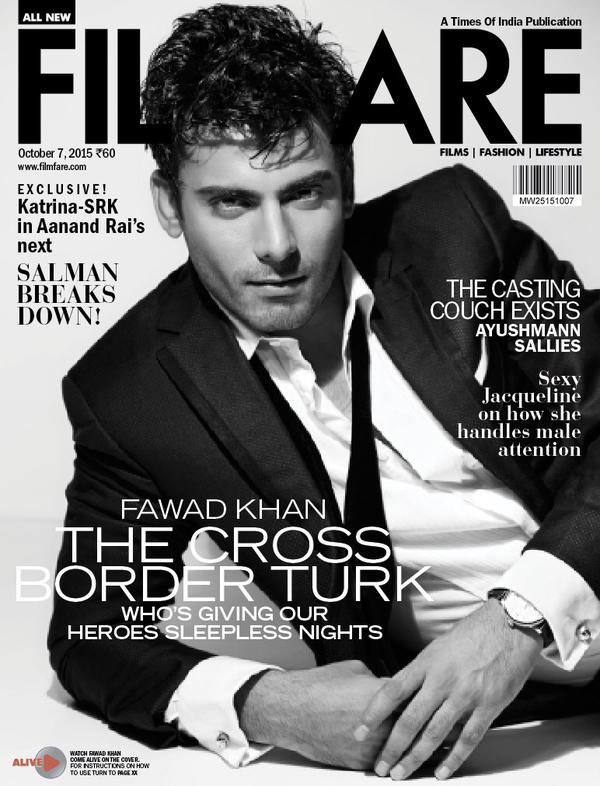 Fawad Khan who had stolen the heart of many singles is again crumbling the heart of the Indian crowd with his biting pose. The actor with the wow smile has made his debut in the Bollywood industry with the film ‘Khoobsurat’ in which he was caught romancing the fashionable diva of the B-town Sonam Kapoor.

Fawad Khan will be seen next with two another B’wood stars that make a lovely pair Alia Bhatt and Sidharth Malhotra in the film ‘Kapoor and Sons’. Fawad will also croon a song with Alia in the movie. It is also been rumored that the newbie of the B-twon Fawad Khan will also make a special appearance in the next directional venture of Karan Johar featuring RK and Aishwarya.

Fawad Khan has many projects lined up for the next year; No doubt he is looking damn hot and sexy on the cover page of Fillmfare Magazine. Let’s just wait for news to get topped with Fawad Khan till then enjoy his exclusive look on black and white shadow.

How Tamasha of Ranbir and Deepika will be fun to Watch