“If these Muslim actors love their wives, why do their wives have to convert to Islam and adopt Muslim culture?”

According to the editorial “Once Hindu girls see Muslim actors doing Hindu roles with Hindu actresses, they don’t find it immoral to be with Muslim men. They start looking for their heroes in Muslim men living in their vicinity.”

You may also like: VHP Drags Kareena Kapoor Khan in Love Jihad Campaign! 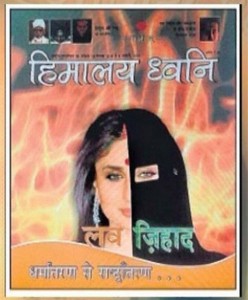 The Hindu editorial stated-“It is because of these films and actors that Hindu girls find marrying Muslim men perfectly normal. These Muslim actors have become an inspiration for the ‘love jihad’ to be perpetuated.”

Munna Kumar Singh, the Editor and Publisher of the Hindu stated -“If these Muslim actors love their wives, why do their wives have to convert to Islam and adopt Muslim culture? Why can’t they continue to retain their Hindu title [read name] instead of taking on the title of their Muslim husbands.”

B-Town’s beautiful actress ‘Kareena Kapoor Khan’ has tightened her security because the actress was splashed on magazine cover of a religious group, as a warning against 'love jihad'.

Again the actress was targeted by the Durga Vahini young women's wing of Vishva Hindu Parishad, in their magazine to support a campaign to "reconvert" Bollywood’s Hindu actress who married Muslim actors.

According to rumors, Kareena Kapoor has hired two bodyguards for more security at her bandra house. A closed source says that-

"With the ongoing love jihad debate, Kareena is concerned about her safety. Unlike a few other stars, she never felt the need to be escorted or chaperoned, until now."

What Happened with Salman Khan After Watching Dolly Ki Doli?