Sofiya Hayat, Ex Bigg Boss contestant is recently is in news as she dumped her glamorous avatar and adopted nun-hood. She is now days called as ‘Gaia Mother Sofia’.

Sofia Hayat, the model who used to post her bold hot pictures on social media is now posting pictures of her new avatar Gaia Mother Sofia and this huge transformation is a big talk about the criticism.

Sofia Hayat, now came-up with another statement “I Am Still Wearing More Clothes than Baba Ramdev” the statement is against the ‘skin show’.

Recently, Rakhi Sawant pointed a finger at her new image posted by ‘Gaia Mother Sofia’ asking “What happened to u dear Sofia u r not mother anymore”

Sofia Replied: “Yes still mother.. Cosmic Mother is everything.. i havevto be everything”

See The Conversation shared by the two ladies 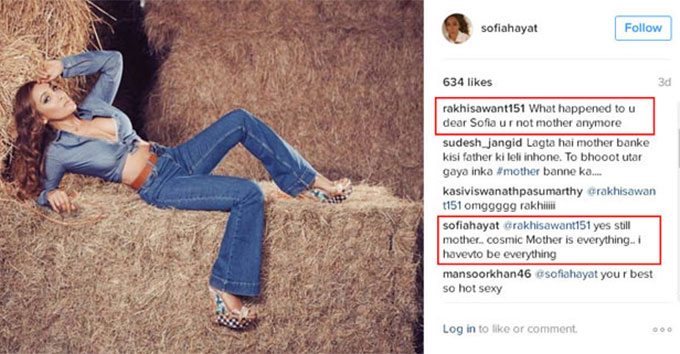 Take yourself so high that you become the light of divinity. Anyone who criticizes any skin show.. I am still wearing more clothes than Baba Ramdev. Our Gods have always been beautiful. Anyone who judges and criticizes, needs to clean their minds and look at this picture, and indeed every woman as a sacred being of creation. A Goddess. When time began a woman on her period was considered sacred. Her blood was sacred. It was the sign of fertility. Now women hide the fact they are menstruating, and are considered unclean. Ask yourself why? The negative, masculine, left brained archon energy did this. The archons are now gone. Remove the programming of associating negativity with women. It is time. The sacred feminine energy is back and is here to stay in all her power, glory and fertility of the earth and LOVE. Namaste Salaam Gaia Mother Sofia.

Do you guys really think Sofia Hayat made a strong point? Tell us in the comments below.

Anushka Sharma, Next To Rope for Sanjay Dutt’s Biopic?