Written update of 20 January 2015 episode of Meri Aashiqui Tum Se Hi: We saw that the show came to a different track. Where, Ishani wore a sexy nightdress and tried to seduce Ranveer (Shakti Arora). But he ignored her.

Manas Tries to Make Disha Comfortable in His House

Here in Manas’ house, His parents were angry and thus didn’t welcomed Manas and Disha. But Manas brought her in his home, held her hand and said that, this home is also hers; she don’t need any permission to come in this house.

You may also like: Meri Aashiqui Tum Se Hi: Disha is Feeling Glad to Marry Manas 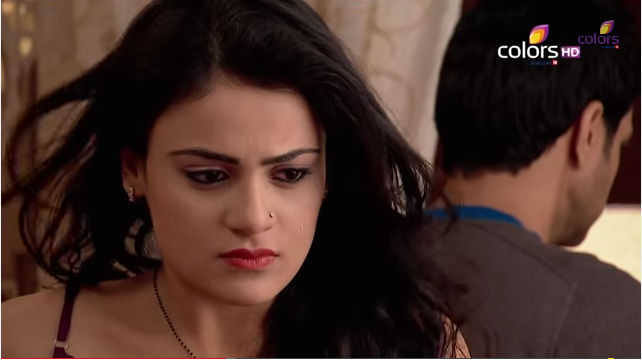 Next morning in the kitchen, Amba said Baa that, she doesn’t understand why Javeri said yes to Sharman’s proposal. Amba asked Baa, where they will keep Ritika. Baa replied that, she can manage everything. Then Amab left the kitchen and Baa got worried about her family’s future and thought, she can’t be sure of RV, so she must do the marriage soon.

On the other side of Meri Aashiqui Tum Se Hi, Chaitali pointed a lipstick mark at RV’s shirt for which RV felt shy. Suddenly Ishani came and stopped her. Ishani asked RV, why he is being so shy like a bride, it is his wife’s mark. Ishani said it is all because of her kadha, can she make another bottle. Chaitali replied, she will make daily a bottle for her. RV looked at Ishani in angrily and left from there.

Here Lakshi was hearing all the conversation and said Amba that, Ishani would again take RV into her grip. Then Amba called Ritika.

Ritiak came to Rv’s house. Amba said Ritika that, she is worried about Ranveer, as he has changed himself now. He comes home from office and goes to office again, she is a mother, and she can’t stay like this, he doesn’t even have a friend; she just wishes to see him happy with her. Ritika replied everything will be alright, and assured that she won’t let him fell alone. Amba asked Ritika, to take RV somewhere out and Ritika promised her to do so.

The upcoming episode of Meri Aashiqui Tum Se Hi would show, what would happen when, Amba approach Chirag, to put Ishani out of RV’s life?