Surprisingly, Ayushmann Khurana starrer ‘Hawaizaada’ has been declared tax free in Uttar-Pradesh (UP) before its release. The movie Hawaizaada is inspired from the life of Scientist Shivkar Talpade. Vibhu Puri, who worked with Sanjay Leela Bhansali in Sawariya and others films, directs the movie.

The flick is presented by Reliance Entertainment and scheduled to release tomorrow on 30th January 2015.

You may also like: Ayushmann Tries 9 Hairstyles to Get into the Look of Hawaizaada

The CEO of Reliance Entertainment, Sanjeev Lamba said “We are extremely happy to receive the tax free grant. This will ensure that the film will reach out to a much larger audience base. The achievements of Shivkar Talpade are largely undocumented and even un-credited. This film is our attempt to highlight one of his biggest achievements of flying the first plane ever at Chowpatty, Mumbai in 1895. We are glad the authorities agreed with us on making the film available as tax free and we hope to follow suit in other states”.

Vibhu Puri, the director of the film said “I am thankful to the authorities for this grant. It took me almost five years to put my vision on the big screen. Now I am sure the film will get its full potential reach in the state of Uttar Pradesh.” 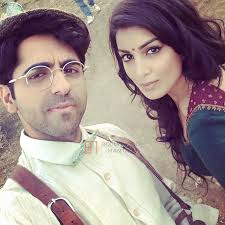 So guys, get ready to watch out Ayushmann Khurrana’s ‘Hawaizaada’ tomorrow in theaters!

Checkout Why Aishwarya Rai Bachchan, Glad to be a Part of Jazbaa?