Amid many yet not so impressive flick in 2015, Bollywood fans are waiting for some quirky and fulltoo entertainment flicks. Thought there are many big ticket and 'A' starrer films lined up in near future however you never know, sometimes the smaller budgeted ones could also offer a big ticket Damaal.

Here is Guddu Rangeela movie poster, from yet another forthcoming release that needs to be look forward for. Wanna know why? Well the movie has been helmed by Subhash Kapoor, who managed to impress the audience and fans with his National award-winning film Jolly LLB. 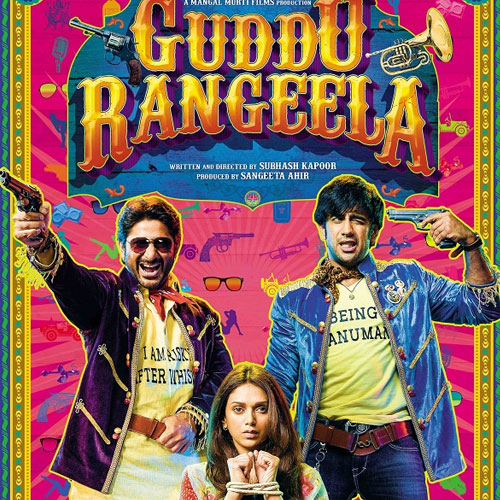 Guddu Rangeela Poster features its star cast i.e. Arshad Warsi, Aditi Rao Hydari and Amit Sadh. The film also co-stars TV’s much popular name, Rohit Roy. The film is coveted to be a masala action comedy with a message, much as Subhash’s earlier releases. Guddu Rangeela lay emphasis on Khap-panchayat and is produced by Sangeeta Ahir.

Arshad Warsi and Amit Sadh could be seen in tacky outfits, standing with a gun in hand and Aditi Rao Hydari setting on her knees with her hand tied, in the of late released Guddu Rangeela poster. Where the trailer of the film would be out by tomorrow conversely the film itself would hit the theaters in July this year.