The action thriller Avengers: Age of Ultron movie is story of superheroes from Marvel comics. The movie from Marvel Cinematic Universe has its own set of rules & universal followers. This is the sequel movie of 2012s super hit released Avengers movie. The sequel movie is an overload of thrilling and mind-blowing action scenes featuring the team of all star, plus a couple of newcomers with special powers.

The whole thing out here is boldly show-offish as the comic messiahs go about the task of ridding the world of a traitor robot bent on wiping individuals off the face of the globe. The movie is all about flying rubble, destroying buildings, exploding vehicles etc. In the middle of the pyrotechnics the movie gets pause on some occasions to give passing insights into the back stories & current preferences of the lead characters.

If we talk about the review, this movie is not like the previous movie this flick is steadily planned sequel. This movie is getting the threads together of this sequel movie could be a task for those people who were not acquainted with the MCU series. So what are you waiting for go and brush up on your Marvel series before watching this movie.

But the big question arises in everyone’s mind that ‘Avengers: Age of Ultron movie’ is better than 2012s The Avengers movie. Definitely this is bigger scale movie but you can miss humors of Loki played by Tom Hiddleston. If you think that 2012 The Avengers movie is biryani than this series is overall a desi thaali.

Glimpse on Sonakshi Sinha Boyfriend on Premiere of Avengers Movie

There is one more interesting news about the movie is the Bollywood actors Sonakshi Sinha, Shraddha Kapoor & Varun Dhawan attended the premiere of Avengers: Age of Ultron in Mumbai on 22nd April 2015. The Dabangg actress of Bollywood Sonakshi Sinha is well-known for creating quite chaos with her sheer on her presence on silver screen.

Recently, the actress posted a photo with her boyfriend along with the caption - “Just hangin... With my boyfriend #AvengersAgeOfUltron @Iron_Man @RobertDowneyJr @Marvel.” Sonakshi Sinha boyfriend, in the photo in none other than but Avengers movie Iron_Man. 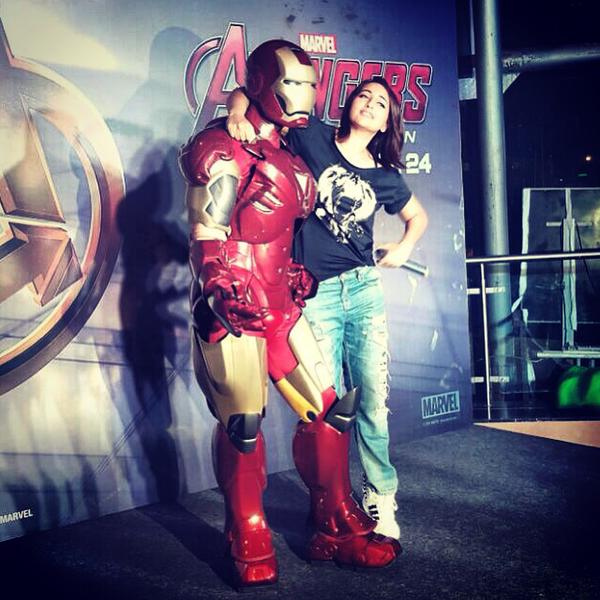 According to the reports the ABCD 2 stars Varun and Shraddha hosted the event and the other Bollywood actors such as Genelia D'souza, Huma Qureshi, Yami Gautam, Farah Khan, Masaba Gupta & director Rakeysh Omprakash Mehra were also present at the premiere of the movie.

After the entire event the actress posted her photo with Iron Many asserting that -"Just hanging... with my boyfriend." Sonakshi Sinha bf photo raise so many eyebrows in the events. Reportedly, the actress Sonakshi Sinha will next be seen in the upcoming Bollywood movie "Akira" of AR Murugadoss.