B-town star actress Alia Bhatt has proved her acting dice in every movie. Not only ON screen we have spotted her in mesmerizing avatar she has even proved herself sexiest on the Magazine covers. This time she has flaunted her hourglass figure on the front cover of Femina Magazine for November 2015 issue.

While donning beautiful full sleeves black coloured tunic and high maroon coloured boots, the actress is giving us hints of winter isn’t it? We are too not shocked but happy at the same time that cute little girl of movie Sangharsh is 22 year in age now and confidently escalating at the top. 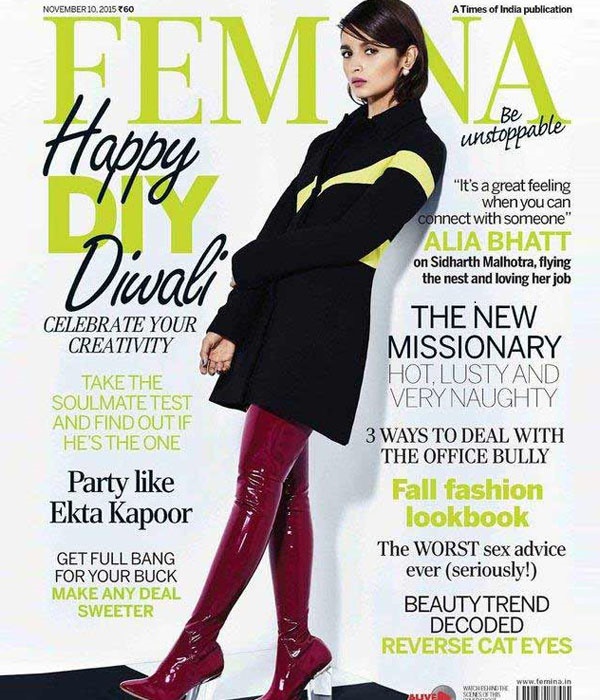 Bollywood diva Alia Bhatt photoshoot for the cover is framing up her short hairdo with this simple look. Well, absolutely after getting the average response for her last release “Shaandaar” the actress is back in the game and is surely flaunting her appealing image. It’s not the first time that she has been the cover girl for Femina Magazine; the actress has been chosen a number of times as the cover girl for the same magazine.

From the insights of the Femina Magazine the actress has publicly spoken about her so called boyfriend ‘Sidharth Malhotra’. Two movies are still lined up for the actress, she will be seen next in the movie’ Kapoor & Sons with her swain Sid Malhotra and also with Chocolaty boy of the B-town Shahid Kapoor in Udta Punjaab.

The last release with Shahid Kapoor didn’t hooked the audience so much let us wait for their next release, till then enjoy Alia Bhatt winter look for Femina Magazine November 2015 issue.