Salman Khan's leading girl in movie ‘Prem Ratan Dhan Payo’ Sonam Kapoor always trends a new set amongst the crowd. She is the most fashionable icon of the Bollywood industry that is always remembered while chatting about the fashion statements.

Recently she posed beautifully for the cover page of Grazia India Magazine for November 2015 issue. While donning a snazzy garb of Gucci the Saawariya girl is looking absolutely ravishing. This is not the first time that Bollywood fashionable queen Sonam Kapoor had posed for Grazia India Magazine, she has been chosen several times as the magazine cover girl. 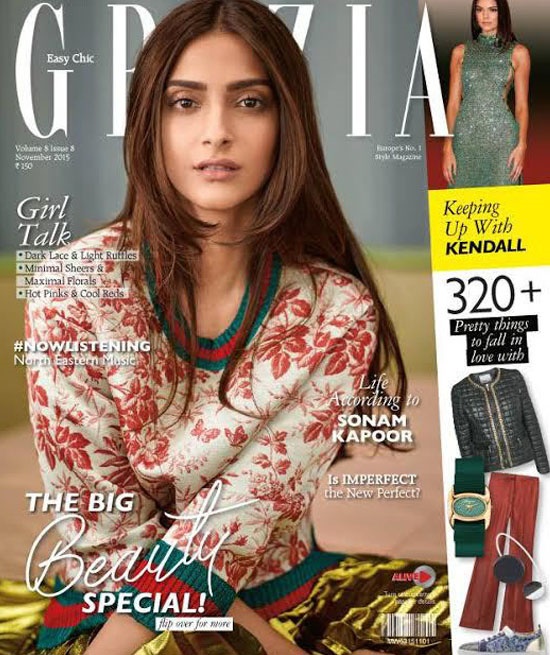 Talking about her style statement for this cover, the actress has been caught wearing a Gucci blossomy print outfit with a dark green and dull red coloured rickrack around the neck line and over the bottom of the sleeves. Even with so dull or light makeup by Mallika Bhatt the actress is looking perfect for the front cover. Her loose hairdo and straight hairs are somewhat looking perfect for the journal’s cover page. In this November 2015 issue Sonam’s fans can also read about her beauty secrets and lifestyle.

Lastly we have seen the actress in the movie 'Dolly Ki Doli' which was also liked by the audience very much but presently the beautiful damsel is very busy in doing promotions of her upcoming release PRDP with Salman Khan.

Well the crowd is eagerly waiting for the movie to get release, the releasing date is not so far, next week the movie will go on the floors. Till then enjoy the gorgeous Sonam Kapoor look on Grazia India Magazine for November 2015 issue.

Kajol in Saree: Beautiful Photos from the Collection