Star Plus’s TV serial Yeh Hai Mohabbatein starts with everyone posing for family picture. Adi does not smile for which every member of family asks him to smile, than Shagun from aside (Adi’s Mother) signs him to smile. Shagun say thanks to Ishita for clicking family pics of Adi with his parents, as they doesn’t have any family picture with Adi.

Shagun is very clever and thus she plans to kick out Ishita from Raman’s life. The upcoming episodes of the show will illustrate how long would Shagun play slick games with Ishita(Divyanka Tripathi)?

All the members of Bhalla family enjoyed New Year celebration. They all enjoyed the dance and Raman(Karan Patel) and Ishita were spotted dancing on the song “bin kuch kahe, bin kuch sune.”

While everyone enjoyed the New Year party, Ishita brought the cake, she said it’s for Adi, as he does have yet celebrated his parent’s anniversary. Shagun thanked Ishita and cut the cake with Raman. OMG!! (Celebrating Anniversary after Divorce, Totally Crazy!!). 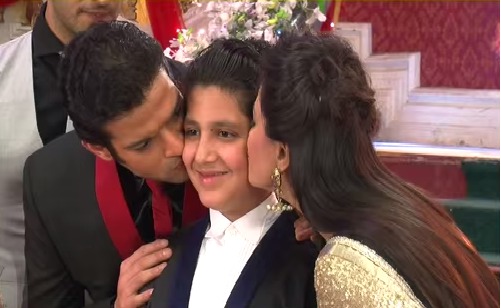 After cake cutting ceremony Ishita said now it’s the turn of gift, which is yet pending. Raman got shocked hearing this?? After some time Raman agreed to give earring to Shagun. For daily update of ‘Yeh Hai Mohabbatein’ stay connected with us!!

Ranveer Singh was Spotted with Deepika Padukone and her Family