Shahrukh Khan is known by many names in the industry as 'Baadshah of Bollywood', 'King of Bollywood' and 'King Khan'. Recently the much-acclaimed actor has been featured on the cover of Hop Luxury Magazine January 2015 issue. The Magazine has an article dedicated to the actor and his tryst with success and failures.

The cover photo depicts Shahrukh Khan with stubble bearded, rough-look donning a black hooded sweatshirt. The Sizzling cool look of the 49-year-old actor is enough to kill millions of girls. This Photo shoot has been done during the time when SRK was busy in the shoot of his previous release 'Happy New Year'.

You may also like: Ranveer Singh’s Handsome Pose on the Cover of Femina January 2015

The article in the magazine is about handsome hunk Shahrukh Khan’s upcoming films titled ‘Raees’, where he will be playing ‘an earthy role’. He said, the movie definitely would gain more and bigger success as compared to 'Happy New Year'.

Hop Luxury magazine January 2015 will cover many different poses of 'Baadshah khan' in the inside as well. 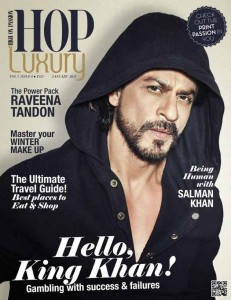 Get more updates about Ranveer Singh from Bollywood news.

SRK Gears Up to Work with Mahira and Nawaz in ‘Raees’