No wonder, both Dhamaal [2007] and Double Dhamaal [2011] have been successful ventures. Therefore it’s nothing new that the third part of the same franchise, Total Dhamaal carries a lot of expectations. Well, it did the same as the trailer. As depicted from its name, it is Total Dhamaal, a full-of-fun flick.

Makers have upped the scale this time by adding three prominent actors (Anil Kapoor, Ajay Devgn, and Madhuri Dixit) to the existing star cast. It is an adventure comedy which is a rarely explored genre in Bollywood. 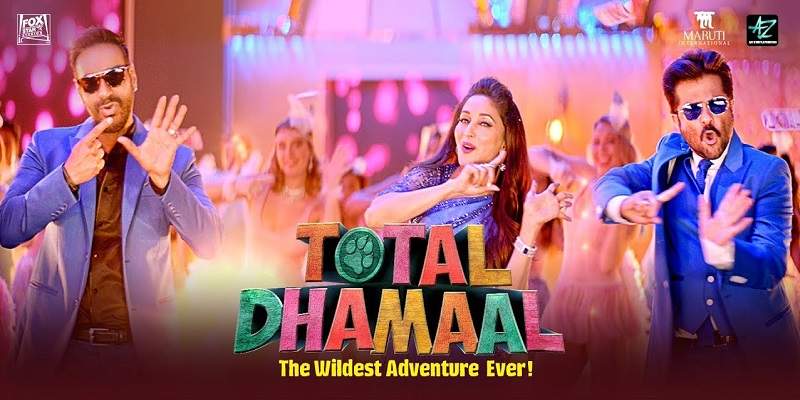 The storyline of Director Indra Kumar’s flick used great imagination in creating a great comedy. It begins as a hidden treasure of 50 crores somewhere placed in Janakpur. So, all greedy and eccentric characters lead a mad chase in hunt of the treasure. The characters include greedy siblings, local goons, bickering couple on the verge of a divorce, a police commissioner and also the mastermind of the loot. Well, you have to watch the movie to discover who got the hidden treasure.

Another banging factor of the flick is entry scenes of all characters. It is hilarious, either it is Guddu or Lallan's. All entry scenes would raise loads of laughs. Also, the way all the principal characters bump into each other is hilarious. Further, the journey of 80-90 minutes while the characters try to reach Janakpur Zoo is full of adventures obstacles which will lead to loud laughs.

Many scenes are funny which genuinely raise laughs like the madness For example Lallan's scary helicopter ride, one in the railway tunnel where Avinash-Bindu's attempt to take a shortcut or the sequence involving the GPS which is voiced funnily by Jackie Shroff. Post interval is another type of Fun even more than we saw in Dhamaal.

Likewise, the second half is also full of humor. The waterfall and skydiving scenes are just like a cherry on the Cake. However, makers have taken a jump in the narrative as they didn't explain like how Lallan got hold of a motorbike or how Avinash-Bindu escape from the waterfall but somehow it fits with the comic nature of the movie.

Further, director Indra Kumar quickly jumped to the climax but in a better way. Must say, as same as Dhamaal, finale gets emotional and gives good frame to the movie. Delightedly, humor surrounding the wild animals gave the climax a nice touch.

About the review, Taran Adarsh wrote,

“#OneWordReview… #TotalDhamaal: ENTERTAINING. Rating: ⭐️⭐️⭐️ No one is looking for logic here... Focusses on humour and entertainment... First half hilarious... Second half could’ve been tighter... Loaded with clean humour... Families and kids should like. #TotalDhamaalReview”

Must say keep your brains at home to enjoy, or people who look for some meaning should not go.

Sridevi's 1st Death Anniversary: This is How Bollywood Remembered Her

Nykaa Awards 2019: Look Who Wore What & Who Won the Award