Reportedly, Sexy Sunny Leone was shooting a scene where the actress had to take a bath with around 100 liters of milk. 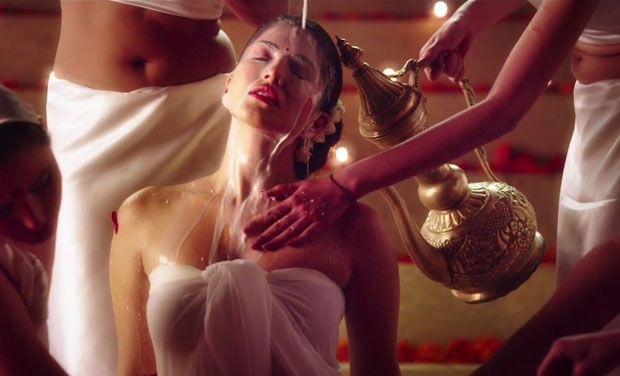 “It was a very challenging role. When I read the script I loved it. But the process of actually becoming Leela would take 2-3 hours. On the first day, I took 6 hours to finalise the look.”

“I received a lot of support in the form of good people in my team. The dialogues for Leela were difficult as well. So learning all that was difficult. But I think when people watch it they will see all the hard work that was put into this role.”

Sunny Leone’s upcoming movie ‘EK Paheli Leela’ is directed and written by Bobby Khan and features the actress in 3 different avatars. Starring Rajneesh Duggal, Rahul Dev and Jay Bhanushali in pivoted roles, the film is all set to release on 10 April 2015.

The pictures of few of the scene were released recently, which are creating a flutter in the industry and among the audiences.

Anushka Sharma Obviated a Fatal Accident on the Sets of NH10