Karishma Tanna and Upen Patel who sealed their relationship on national television in the much-controversial reality show Bigg Boss, are these days raising eyebrows in reality dance show Nach Baliye 7. Well we meant by their dance performances! Despite tricky love story of the two has also become a talk of the town.

Where Karishma and Upen are going strong on the performance front however, the two are being alleged fake and reality couple every now and then. Where Judge Chetan Bhagat thinks that the two aren’t a real couple conversely rumors of the two cheating in the love tasks are also doing rounds.

Amid a lot of allegations and speculations, here comes another eye-catching news, that the two have got engaged on the sets of the show. Well, be it a talk about their love, their romance or their relationship, all had a flying start on national television. And now, the exchange of rings on the sets of the show is as another drop in their bucket of reality couple title. 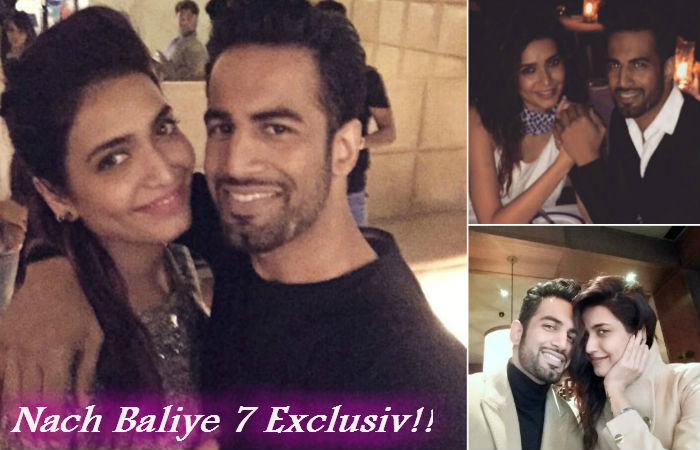 Well where for some, it might be an awww! movement on the other hand for others it might be a mere popular stunt. Indeed this would make the show’s TRP soar to heights as it earlier had when the two shared intimate movements on Bigg Boss. We couldn’t say anything about the two as of now however, Upen and Karishma seems eager to get hitched soon and spend their life together. If so, then we wish the couple, a happy and prosperous future ahead

Read Why Karishma Tanna and Upen Patel Were Accused of Cheating?

Recently the couple was lied blame of cheating on the show while the love tasks. According to reports, Upen stored the answers on his cell phone during a task in which the compatibility of the two was being checked. However, a source close to the couple slammed all the allegations asserting that the two are heading strong and they don’t need to do that.

Well, much –recently another couple from the show Rashmi and Nandish were also hold accountable of cheating during a love task. Coming to the topic, there hasn’t been any update about Karishma Tanna and Upen Patel’s love confession yet, however we aren’t sure it’s mere a gossip or a true talk. Let’s wait until any further development in the story of the two, and if it’s true then we would soon witness the confession of the reality couple in another reality dance show!

Welcome to Karachi Is Back With the New Track ’Shakira’