Meri Aashiqui Tum Se Hi episode 143 showed Amba said Ishani that, she must drink Kadha first. If nothing happens to her then Amba will drink it. Ishani said, she is telling the truth, she didn’t mix anything in the kadha.

In the restaurant, Chaitali sat with a newspaper, keeping watch at Sharman and Ritika. But suddenly waiter saw chaitali and thought that, the lady look like a thief.

What Happened When Ishani Drunk the Kadha?

Meri Aashiqui Tum Se Hi: Ishaani pleaded Amba to believe her. RV came and said that, one does not ask for trust, it is won. He said that, his mother doesn’t need the kadha.  Ishani said, he asked her to stay with him and his family, so she is doing the same. Then Ishani took the glass and drunk the kadha.

Meanwhile Sharman and Ritika were about to leave when Chaitali though, ‘Sharman is behaving just normal’. Does it mean Ishani’s kadha got exchanged with shraman? The police came there. Waiter pointed at Chaitali said that, she is a terrorist.  Chaitali said that her name is Chaitali Parekh and she isn’t a terrorist. 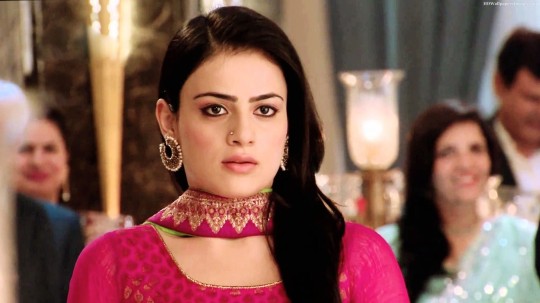 In RV’s room, Ishani looked the door and held the key in her hand. She came to Ranveer (Shakti Arora) in an enticing manner and tried to seduce him with her seductive Looks. She started dancing with him.

On the other side of Meri Aashiqui Tum Se Hi one girl came in the house. Amba saw the girl and asked her that, who is she? Then she replied, she is Ruby from Escort service. Ruby said that, RV is alone, she came to spend the night with him. Amba took her sandals off, Lakshmi held Ruby while Amba ran behind her to beat her.

Amba said Lakshmi that this isn’t right; she won’t let her son go on the wrong path, she wants to stop her son.