Jhalak Dikhhla Jaa7 – The most famous dance reality show in Indian television history was launched on June 7, 2014. The show started its journey with Ranvir Shorey and the host drashti Dhami, later replaced by Manish Paul. Karan Johar, Madhuri Dixit Nene and Remo D'Souza are judges. The show was started with 13 strong contestants with some new and fresh faces of Television’s daily soaps. This show is running with full swing and this is the most popular reality TV show of Color Television right now. [wptab name='Overview']

Color’s TV’s popular reality show Jhalak Dikhhla Jaa 7 has now reached at its final stage and the names of the four finalists have been revealed. 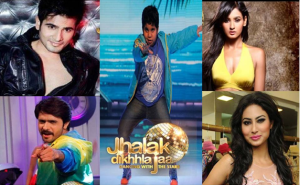 Only the best will win the show and by the experts point of view Shakti Mohan is very consistent candidate, if he comes among the most serious candidate for the title of JDJ7.

In the coming weekend, all celebrity will be performing on Jhalak with the theme that decided by notch choreographer Ganesh Hegde. And Madhur Dixit will be seen performing her famous song “Choli Ke Pichhe” from the Khalnayam Movie with Ganesh Hegde.

You May also like: Salman Khan and Sangeeta Bijlani Together in Big Boss Season 8

Surely Jhalak Dikhhla Jaa7 would be buzz with excitement this weekend. So, don’t miss to watch its grand finale episode.

Please visit again, For the Jhalak Dikhhla Jaa7 Finale winners, which will be declared very soon.

Ashish is popular actor in “Daily soap”. He will put his best foot forward to win more hearts in JDJ. He has a sure shot chance of being in the finals. He gained popularity from his performance and his hot looks.

Shakti Mohan is the toughest contestants in this Jhalak Dikhhla Jaa season 7. She will increase the breaths of the JDJ performers in Grand Finals and always gain high performance score and popularity from JDJ judges.

Shakti deserves to win. She is the best dancer and highest voted contestant of this season.[/wptab]

She is the favorite TV actress, played a role in Ekta Kapoor’s show “Kyunki Saas Bhi KabhiBahu thi”. The actress and dancer Mouni Roy and her choreographer Punti Pathak are already amongst the top 3 contenders for the final round in the dance reality show ‘Jhalak Dikhhla Jaa 7’.

We believe she will win the grand finals because of her dancing, beauty and fan following on TV show.