Nishikant Kamat family drama was much awaited by the movie lovers and the film finally has been posed in the market today. Do not make any hurry in buying the movie ticket for the weekend first read on our Drishyam Movie Review and securely invest your weekend plans.

The movie is all over wrapped with the constant turns of ebb and flows. As we all know the movie is the remake of Malayalam film, but if you have watched the original version of the film, this latest version of the movie will baffle you. But on the other side if you are the fan of Ajay Devgn surely you will love his performance and the chemistry between his family and two daughters.

Another star cast of the movie Tabu who has come back on the big screen after a long time has played the role of cop fits best on her. The movie has been released in many languages before, and in all forms the movie got the amazing response.

Not focusing on the films Malayalam version which was directed by Jeetu Joseph only talking about the Hindi version, the stars had put on their best performances. Chatting about Ajay Devgn, a harsh appearance is being ordinary and that is commonly noticed in his earlier films also. The South Indian actress Shriya Saran is actually not looking as the mother of two daughters. 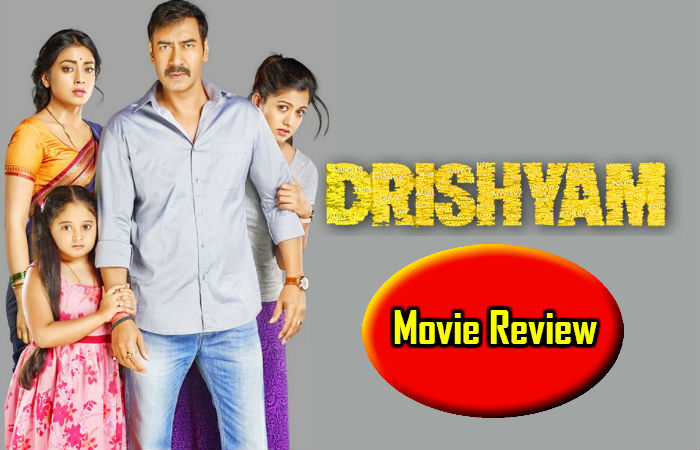 But overall we can say that Drishaym Movie is surely one time watch as it talks about a common man but not chats about any routinely love story with one hero and villain in the film contrary it teaches us how a common man always secures his family at any cost. The story is th engaging fare. Watch at least once for the sharp twists and with dense situation that a man suffers and also enjoy the acrid appearance of Ajay Devgn once again.

If you like the review then surely watch the movie this weekend itself, but if didn’t like the same than thanks us for saving your bucks.