The last episodes of controversial reality show ‘Bigg Boss 8 Halla Bol series’ started with lots of twist and turns. After the end of the luxury budget task ‘Bigg Boss Ka Call Centre’, Dimpy Ganguli gets upset with Karishma for making the task a source to defend and get explanations from Rahul Mahajan.

During the phone call, Karishma continued releasing her ebullition on Rahul, which made Dimpy upset and she emotionally hugged Rahul. Dimpy showcased her outburst mixed with awkwardness and guilt in front of Rahul.

Dimpy Gets Upset on Karishma Tanna and Shows her Outburst

But Rahul pledge her that

“he knows what he is doing and that nobody in this existence can say or do anything that can turn his life”.

Other contestants of Bigg Boss house Gautam, Mahek, Sambhavna, and Sana supported Dimpy and Rahul and said that Karishma Tanna actually crossed her limits by using a luxury task for her personal peace of mind.

After all this drama the current Capitan of the house Karishma Tanna came to Dimpy, to solve all the misunderstandings between them. But Dimpy was seen very upset and thus she ignored Karishma.

This Weekend; Upen Patel to Leave the Bigg Boss House 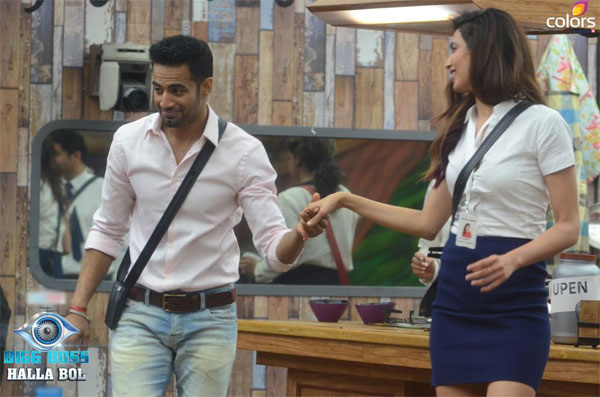 After a span of time, Dimpy expressed her emotions to Mahek about her relationship with Rahul Mahajan. She said Karishma should understand her relationship with Rahul and remember that her boyfriend is also watching the show. Later Rahul talked to Karishma and said that whatever he said to her was just for fun and they sorted out all the differences.

Apart from all this, entry of Upen surprised everybody and added spice to the show with betterment in the TRPs. But recently a source revealed that-

"Exclusive: Upen is A guest in the house and will be out this weekend."