Dimpy’s ex, Rahul Mahajan who is apparently a comrade of Gautam, lately got involved in an argument with Gauti, down to slip of his tongue. Well Gautam and Rahul were seen talking in the garden area whilst Rahul said something owing to which Gautam lost his temper and warned Rahul to not cross his limits.

Gautam was seen hindering Rahul to get involved in the mess, which could devastate his image. The fuss between the two soon resolved as Rahul said that he take his words back and the two so-called friends were seen hugging it out. 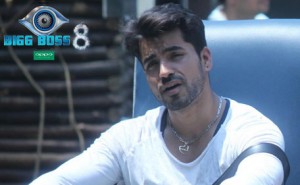 However, as it seemed this wasn’t the end, later than Rahul Mahajan was noticed grousing about Gautam Gulati to ex-wife Dimpy Ganguly and ‘Makeup queen’ Karishma Tanna. Karishma Tanna to which in turn added that imagine how people are tolerating him since the last three months.

Dimpy on the other hand called Gautam fake, saying that he teaches people to respect elders, does he himself shows respect for people who are elder to him inside the Bigg Boss 8 house? Rahul on the contrary supported Dimpy that Gautam is fake and it would be very wrong it his fakeness would make him win the show.

What! Rekha and Amitabh Bachchan not Together in Shamitabh?