Bollywood’s megastar Amitabh Bachchan was dubbed India's first "angry young man" for his on-screen roles. The actor flattered the audiences with his outstanding performances many times. Now Big B is headed to come up with yet another quirky look in ‘Shamitabh’, which is directed by R Balki and co actors Dhanush and Akshara Hasan.

Amitabh Bachchan talks About His Character in ‘Shamitabh’

Bachchan said “As you watched the trailer, he (the character) is a frustrated man,". When he was asked about his character and experience to work with Balki , he replied "an actor only follows instructions."

He said that, "No work is easier in life. People may think that one feels good in front of camera. I have been working in the film industry for many years. Sometimes there remains a fear that what is cameraman thinking of, what is the demand of the script and whether I will fulfill or not,"

When Big B was asked about, Abhishek is once again turning a producer with ‘Samitabh’ then he replied, 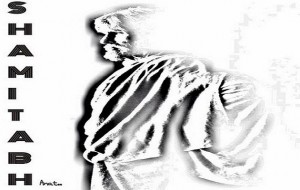 "People have their own thinking, Abhishek had earlier produced films ('Paa') and he is also doing acting apart from producing films."

You may also like: ‘Shamitabh’ Cast on Filmfare Magazine’s Cover January 2015

Some of the scenes of 'Shamitabh' were shot in Seven Hills hospital in Mumbai where Bachchan had undergone an abdominal surgery earlier. Bachchan said about that,

"Balki insisted to shoot in the same hospital to add element of reality,”

The Actor said about the trailer that, "It is not picture, it is mixture."

Balki said 'Shamitabh' is a story based on two egos who clash with one another.

Balki has earlier directed movies like 'Paa' and 'Cheeni Kum' with Bachchan.