This track is Sung by Divya Kumar, has been written by Irfan Kamal and music composed by Sajid-Wajid. It is a nice track with peculiar lyrics. The video of ‘Dolly Ki Doli’ title track is gleeful and peepy as compare to that of the other songs.

Bollywood’s fashionista Sonam Kapoor is looking out of the world in all bridal dresses, be it a Punjabi bride or a Bengali. Pulkit Samrat is also featured in the video of ‘Dolly Ki Doli’ title track, who is in search of ‘dolly’ a con woman. 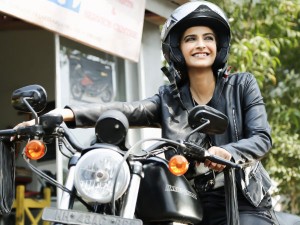 You may also like: Exclusive: Sonam Kapoor to Play Neerja, the Valiant Airhostess

Rajkummar Rao and Pulkit Samrat co-stars Sonam Kapoor in director Abhishek Dogra and producer Arbaaz Khan’s ‘Dolly Ki Doli’. This movie is all set to be release on January 23, 2015.

Amitabh Bachchan to Enact a Frustrated Man in 'Shamitabh'