B’town actress Vishakha Singh, who has films like 'Fukrey', shockingly, gave it back to an abuser on the famous social networking site Facebook.

Vishakha had posted a photograph of hers on her Facebook that read: “Everybody is somebody’s foreigner. Wearing Madversity’s cool new Tee ..looking forward to more such quotes!”

Of the numerous comments she got on this photo, one said, "Nice looking and nice b****."

Vishakha took no time to stand firm for herself and answered, jokingly, to the user

“Mr MD Mustakim Saifi, 1) remove that innocent child’s picture as your dp. 2) have the guts to put your own profile picture . And then comment.”

Vishakha Singh’s Back Fire to the Abuser on Facebook 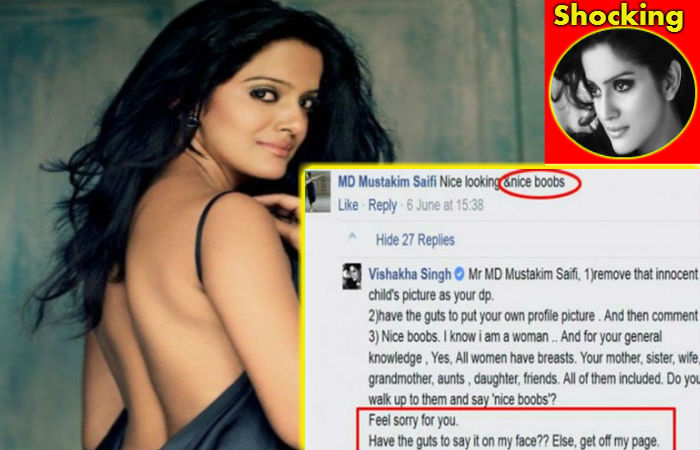 She continued, “I know i am a woman.. And for your general knowledge, Yes, All women have breasts. Your mother, sister, wife, grandmother, aunts, daughter, friends. All of them included. Do you walk up to them and say ‘nice b***s’? Feel sorry for you. Have the guts to say it on my face?? Else, get off my page.”

The photo and the comments there with turned into a web sensation instantly. The actress later erased the photo that welcomed so much consideration and posted a Facebook status: -

“Deleted the post that went viral. Not afraid of anyone but simply tired of unwanted negativity. A big thanks to all those who supported.”