Bollywood actress Vidya Balan, who always surprised us with her different and unrecognizable looks in her films like DF and KahaniT. Recently, she has poses for Film Fare Magazine June 2015 edition.

In this magazine cover, Vidya amlost look alike the most famous comedian Charlie Chaplin. After this photo shoot we can just say that this actress has nailed it.
Seems like the Photo shoot for Film Fare magazine, is going to break the trend, Vidya Balan proved that flaunting your curves doesn't make you popular. We can say this is the best tribute to Charlie Chaplin by this actress.

In this photo shoots Vidya wears black and white dress combination with a black hat and also catch a walking stick in hand. You can see Film Fare Magazine’s June edition cover photo in below side. 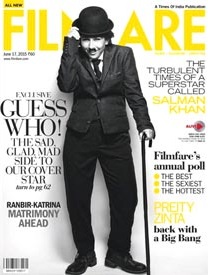 We can see Vidya Balan with Bollywood serial kisser Emran Hashmi in their upcoming movie Hamari Adhuri Kahani very soon. Director Mohit Suri’s directed this film, which is going to release on 12 June 2015.

The film makers had already launched movie's trailer and songs. To have a glimpses of it, visit music review.

B’town Beauties Who Feels Pompous to Showing their Assets