Bollywood Hunk Varun Dhawan is the new cover face for FHM Magazine June 2015 issue. Subsequent to acting in the different kind of films like satire, drama, thriller and now the youthful heartthrob will be seen performing some magnificent moves in the film, ABCD 2. In the FHM magazine, he discusses his film ABCD2 and past discharge Badlapur. ABCD2 discharges on June 18 in the UAE with an overall discharge on June 19. The film is a Disney creation and will likewise be screened in 3-D. 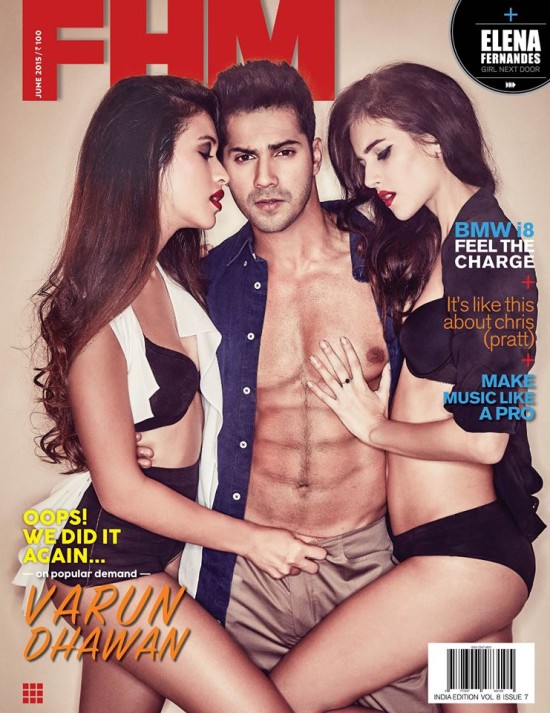 Varun is posturing on FHM magazine cover remaining with his shirt unfastened and egotistically remaining between two female models that are going ga-ga over him. One model is posturing to his right side and the other to left side.

In any case, our eyes are attracted to the eminent abs that Varun Dhawan has been displaying since Student of the Year and that has made him the man who can make ladies of all ages go frail in their knees. We cherish his tough looks and his gelled and edited hair is giving him more smarty look like never seen.

Varun Dhawan is the child of popular veteran director, David Dhawan but then, Varun took acting lessons from acting school before he started acting in movies. He was seen by none other than Karan Johar and was cast in Student of the year.

At that point he was seen acting in movies like Main Tera Hero and Humpty Sharma ki Dulhaniya as an extremely adorable good looking boy.