One of the most highlighted films of the year ‘Udta Punjab’ doesn’t seem to escape from controversies. This time it is said to have been adapted from Ben Elton’s 2002 novel High Society.

Shahid Kapoor, Alia Bhatt, Kareena Kapoor and Diljit Dosanjh starrer Udta Punjab ran into serious trouble with the censor board for its language and content. It even got leaked before the theatrical release but was appreciated by the critics. The altercations no way seem to die. The new reports from Times of India suggest that the plot is very similar to Ben Elton’s novel High Society.

Udta Punjab comes in the row of Plagiarism 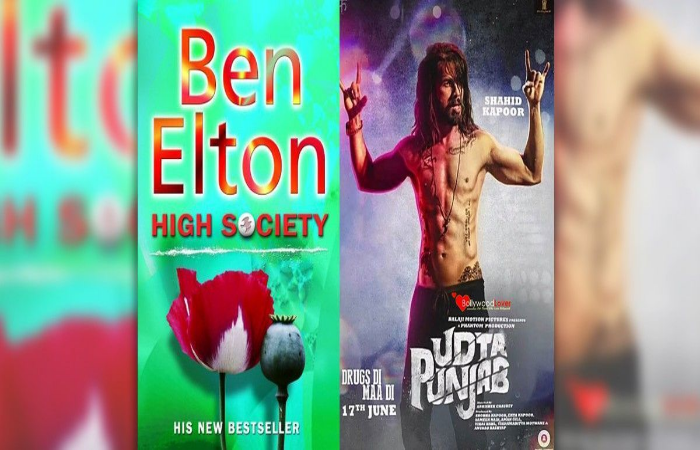 The report states that several aspects of the script have been copied from the novel. When this was examined by other publishers, they also landed up to the same conclusion. Scroll found several similarities between High Society and Udta Punjab (scripted by Sudip Sharma and Abhishek Chaubey).

The most important one is the title itself. ‘Udta’ derived from ‘High’ and ‘Punjab’ derived from ‘Society’ i.e. state. The novel also has the three lead characters alike the film.

High Society is about British Drug Culture. Tommy Hanson, a successful musical artist and drug abuser meets Jessie, a seventeen year old sex slave who runs away after being exploited. The novel shows her struggling journey of escape from prostitution and drug addiction. There is a third character Barry Leman, a loyal police commander who wants to expose the drug business and all the politicians and top officials network to it.

When asked about this to Sudip Sharma with Scroll, he said-

If anything, Udta Punjab was inspired by Traffic (2000)

He had also read High Society but a long time ago and he did not remember most of it.

Sharma was also inspired by an article of Tehelka Magazine by Sai Manish.

It was on the Punjab drug crisis. This article was published in 2012, a few months before I met the director of the film, Abhishek Chaubey.

Writer Abhishek Chaubey and Producer Anurag Kashyap have not commented on the issue so far.

Why these Celebrities Were NOT Invited in Ranbir Kapoor's B'Day Bash?

Missed out your ticket for Coldplay concert? Here’s another chance