Tom Cruise held to the door of an Airbus A400M Atlas military transport as it took off and flew at 5,000 feet above the British countryside.

Have a Look on Tom Cruise Most dangerous Stunt Yet

You may also like: One Direction Artist Zayn Malik, To Sing and Act for Bollywood? 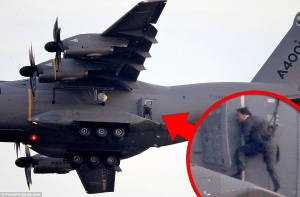 Bollywood Celebs Who Became The Martyr Of Morph Images