The broadcasting of controversial Bollywood movie 'MSG: The Messenger of God' has been banned by Punjab government in the state, on Saturday Jan 17th. The movie MSG’ stared ‘Saint Gurmeet Singh Ram Rahim Ji', head of the Dera Sacha Sauda sect in the lead role.

“The screening of this movie has been banned on the advisory of the Government of India (GoI).”

Parkash Singh Badal added- “We have received an advisory from the central government to ban this movie and thus the state government acted accordingly in the larger public interest.” 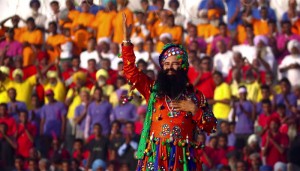 CM ‘Badal’ - The Screening of Movie Could Lead To Serious Issues

You may also like: ‘PK’ Controversy: Akhilesh Yadav Makes ‘PK’ Tax Free in UP!

“according to the reports of intelligence agencies of both the Centre and State governments had said that the release of this movie could have led to serious consequences in terms of law and order problem in the state”.

Advisor to the Punjab Chief Minister, Harcharan Bains said that-

“The Punjab Government has decided to stop screening of the movie ‘Messenger of God (MSG)’ in the state.”

Seeing the protests against the movie in Sirsa authorities imposed prohibitory orders on Monday.

“We have imposed Section 144 (banning assembly of five or more people in an area) at a few places in Sirsa, including near a Sikh shrine. “

Yeh Hai Mohabbatein: Would Ishita Apologize to Shagun for Adi?