Bollywood style icon Sonam Kapoor film 'Khoobsurat' released at the box office today. Afzal Khan, actor will appear opposite her in the film. These two have worked hard to promote their film, ranging from TV reality shows Sonam-Fawad duo appeared during the event. 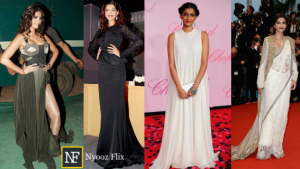 Sonam during film promotions, wear exclusively different attire and always appeared in fashion. Her dressing sense and attitude is famous in Bollywood. She often stays in the spotlight because of experimental, delightful, fashion and unpredictable dresses. Party, launch events, film screening Sonam looks are exclusive and remarkable from other actresses.

"Dress up or dress down, the one thing that you will always have is your attitude. Hold your head up high and stride into the party venue like a fashionista!" she said in an interview with Mid Day.