Sonam Kapoor and Salman Khan will be seen soon in Sooraj Barjatiya’s next film, “Prem Ratan Dhan Payo”. It’s  an action – oriented film and Salman is playing double role in the film.

In this movie, Salman (Ratan’s character) is playing a king’s role and Sonam Kapoor plays a princess role. Sonam was very excited, when director offered her  an opportunity to perform love scenes with Salman Khan.  Salman is playing double role as “Prem” and “Ratan”. He is casting as a loving role and another one is a fighter.

Soonam told media - "Working with Sooraj ji and Salman is like the weirdest thing because I have grown up watching Prem (Salman's character) and it's like, 'Oh my god! Prem is going to romance with me.',"

However, this is not her first film with the 48-year-old superstar. The 29-year-old had  romanced with  him in her debut film Saawariya. 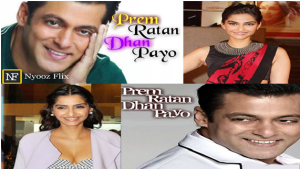 Sonam Kapoor Said - “He is amazing. He is a professional; he has got the highest amount of IQ."

"I have never seen him being nasty to anyone or rude to anybody. He has immense respect for women and he is extremely hard working. He is always on time, always improvising. He is one of the best actors I have ever worked with. He is always trying to do something different."

Nargis Fakhri on the Cover of MAXIM Photoshoot