After a long break, Manoj Bajpayee is back in cameras. ‘Kriti’ is a short film directed by Shirish Kunder, the movie features Manoj Bajpayee, Radhika Apte and Neha Sharma in lead role.

‘Kirti’ is an 18 minute short film. In film Manoj Bajpayee is playing a role of a writer who is suffering from a psychological disorder, while Phobia actress Radhika Apte and Neha are playing crucial roles in the movie.

The movie revolves around a psycho (Manoj) who visualizes his creation that turned into a girl. The imaginary girl is a psychiatrist Radhika Apte , who helped the writer to get rid of all people and later caught by cop its and very interesting story. 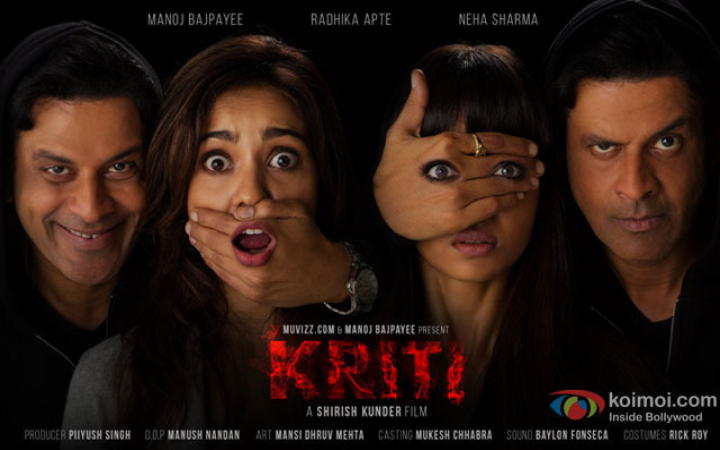 Shirish Kunder the director of the movie ‘Kriti’unveiled his short movie “Kriti” with lead actors Radhika Apte. Manoj and Neha. The movie is launched by talented acting queen Kangana Ranaut on Wednesday.

Bajpayee said, “I always felt that internet is becoming wider and bigger and better. And that one should really explore and experiment with. ‘Kriti’ just happened; it was from a girl’s point of view. I came with the idea of doing it for the portal and he immediately agreed and in five days we have the script ready. What a fantastic music he has given.”

Neha said, “I am much honored to be a part of this short film, with this bundle of talent that I am working with on this film. I don’t really get roles that are so interesting very often so when I was offered this, I jumped at it.”

“This film was such an intense experience. This is such an amazingly written, directed and performed piece of art. I am so happy that I am getting to launch a film made on a very big scale. I am happy that Shirish thought of something so progressive. I loved it, it is so spooky.”

The Trailer Of The Mirjya Seems To Be Iconic & Heart Touching