Divine rhymes with a beautiful combination of touchy words and magic embedded in it are just few shining words to describe the great Lyricist and director Gulzar Saab. He presents unique side to every zeal and elation, and discovers new meaning to every situation.

Right from the filmy dialogues to the lyrics of the songs, Gulzar Saab is honestly the one in a million whose words and excellent colloquies will always remain forever. Turning the pages of his journey in the Bollywood industry so far it has been noted that not only the leading actors of the B-town like Salman Khan, Amitabh Bachchan and others are big fan of him, this great man has mammoth of followers on different social networks also. Now let's read on some unknown facts about Gulzar Saab.

Gulzar Saab is Very Popular! Yet These Points are still absent in his popularity: 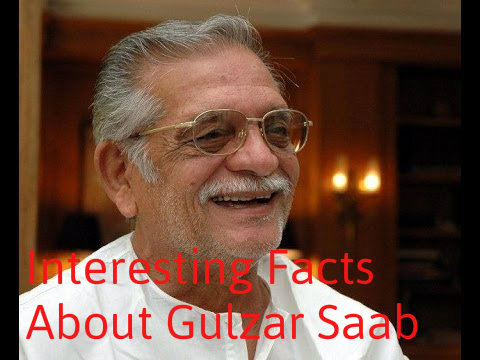 Apart from writing lyrics and downing the pen for different poems Gulzar Saab interests also encircles sportsmanship. He is very good tennis player and play for the sessions early morning.

Just before he became famous and his talent was identified, the great man has worked as the mechanic of a garage.

Remember the prayers which you all sung during your school days Humko ki Man ki Shakti Dena. Yes! The lyrics were penned by Gulzar Saab.

He has been helping deaf and dumb children from long time. Just for his movie ‘Koshish’ which depicted the story of dumb pair he learned the symbols of the language so that he truly could connect with their emotions.

Not only Sampooran Singh Kalra has penned the lyrics for movies, he has also given the lyrics for ‘Jungle Book’. Yes the favourite cartoon of many of ours during chidlhood and the lyrics are still not forgotten "Jungle Jungle Baat Chali Hai".

Top 5 Indian TV Shows that Raised the Flame of Controversy