Bollywood’s star Salman Khan, those people who know him say he has big heart. And he is known among people for their helpful nature. He is always willing to help others.

Salman Khan and Katrina Kaif's relationship may not exist, but he is keeping his promises to his ex girlfriend by casting her sister in his next movie now thinks that her sister is more talented than her. Sallu had promised Kat that he will launch her sister Isabella and he has done it. He is casting Isabelle in his next production movie venture, Dr. Cabbie.

Salman said that he thought of Katrina’s sister Isabelle to be more talented than Katrina herself and making extra efforts for Isabelle's launch in movies. She will be seen in the upcoming Canadian film that stars Kunal Nayyar, Vinay Virmaniand hit the screens on 19th September. Salman also plans to dub this film in major regional languages and release it in India.

The music launch of this film was held in Toronto and the actor revealed some info which may not be liked by Katrina Kaif. Salman attended the music launch of the forth coming Canadian venture, Dr. Cabbie in Toronto where he shook a leg with Katrina's sister Isabelle Kaif. “Salman feels that Isabelle is more talented than Katrina”. 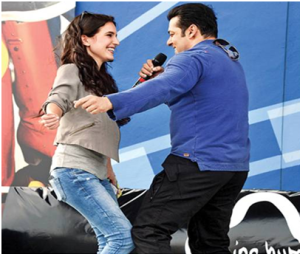