Dabbang star Salman Khan’s sister Arpita Khan is soon getting married to Delhi-based boy, the son of politician Anil Sharma. Apparently being the most anticipated wedding of the year, yesterday’s Sangeet ceremony was attended by many huge name and was studded with Bollywood stars.

You may also like: Salman Khan and Govinda Roped In For ‘Kaththi’ Remake

Guess what? Shah Rukh Khan, the Badshaah Khan of Bolywood also blessed Salman’s sister with his presence at the event. SRK, who earlier declared that Salman’s sister is akin his own sister even asserted that he would attend the wedding no matter whether he is invited or not. Consequently, SRK kept his words and approached Arpita the bride-to-be, in Galaxy apartment and blessed her prior her wedding. 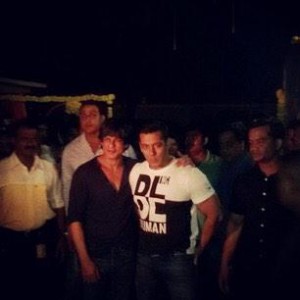 Lately sister Arpita as well as brother-in-law Atul Agnihotri both shared a beautiful pic of Salman Khan and Shah Rukh Khan along with the to-be bride, Arpita Khan!

Meanwhile Arpita Khan’s nuptials which would take place on 18 November in Royal Falaknuma Palace in Hyderabad, is going to be a grand wedding!