Amba went to Chirag’s house and told him that she wants his help to throw Ishani (Radhika Madan) out of Ranveer’s (Shakti Arora) life. Amba asked him to tell everyone in the pooja that Ishani loves him. She promised that, she will give him money for that.

On the other side of Meri ashiqui tum se hi, family members were busy in preparations of the pooja. Parul came there and asked Falguni what she is doing. Falguni replied that they have a ritual in the family in which a husband puts on oil at wife’s body.

Here Baa was shocked to see ear-ring on RV’s jacket. At the same time Amba told her that Ranveer and Ritika were together last night, Ritika still loves Ranveer.

You may also like: Meri Aashiqui Tum Se Hi: Ranveer Accepts, Ishani is his wife 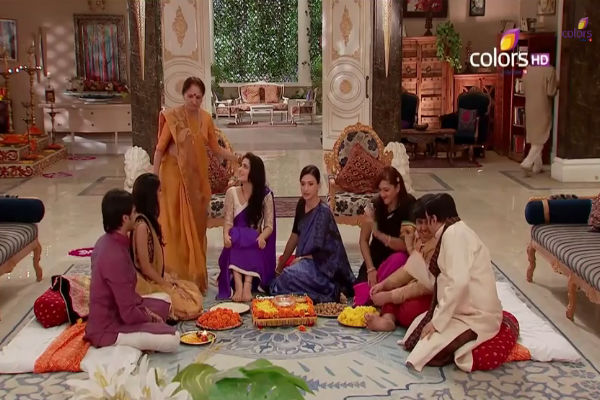 After hearing Amba’s words Baa went to Sharman and asked him about last night’s date with Ritika.

In the pooja, Falguni asked Ishani, Where is Ranveer? She replied, you start the rituals he will come. Ishani sat there. Chaitali, Falguni, Baa putted oil on Ishani’s feet. Falguni again asked about Ranveer, what if he doesn’t come. Ishani replied, if he won’t come, she will go to him as it is about fulfilling the rituals of the pooja.

When RV didn’t came then Ishani went to Ranveer and tried to put oil on his cheek. But he threw the pooja thali from her hands.

In today’s episode of Meri Aashiqui Tum Se Hi, we will see Ishani and RV struggling to stand on the oily floor and she falling over him.