The Hollywood movie super star Richard Gere gifted Narendra Modi a tassel of flowers and a Tibetan scarf along with lots of best wishes. The Tinsel Town’s famous actor Richard Gere is the chairperson of ‘Gere Foundation and Global Envoy of International Buddhist Confederation’. 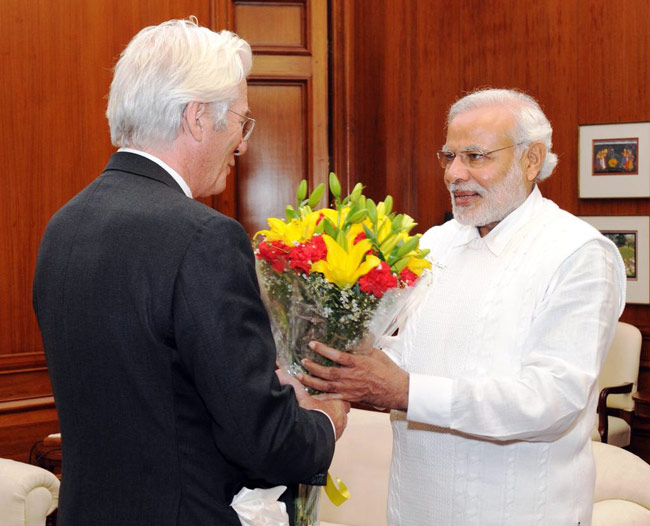 You may also like: PETA: Narendra Modi and Rekha are India’s Hottest Vegetarian Celebs

This is Narendra Modi's second meeting with a Tinsel Town super star as Prime Minister of India. In September 2014, Prime Minister shared the stage with Hugh Jackman in New York at a rock concert.

The actual purpose of 5th January’s meeting of Prime Minister and Hollywood actor Richard Gere is not revealed yet. Earlier the actor shots in pink city ‘Udaipur’ for the film ‘The Best Exotic Marigold Hotel 2’ with Indian actress Lillette Dubey and again he has shown his love for India.

The famous actor of Hollywood Richard Gere made headlines when he kissed the beautiful and gorgeous actress of Bollywood ‘Shilpa Shetty’ in 2007.

Get more about from Bollywood news.