137th episode of Meri Aashiqui Tum Se Hi: In party, Ranveer (Shakti Arora) danced with Ishani , in the wrong way. The whole family disliked the dance and Ishani was hurt with the dance. Suddenly Chirag came to the party and RV asked Ishaani to see who has come to her. Ishani asked him (Chirag) how he dared  to come here? RV announced that Chirag is the special guest and, it is his sister in law’s (Disha) party, and how it is possible for his wife’s boy friend to doesn’t come here? After some time Ishaani came to RV who was heavily drunk, and she took him to the room.

In the room, Ishani said RV, she is the reason for all his suffering and he must punish her not himself. She can’t see him like this, but he doesn’t allowed her to touch him. Then he said, he has named the house to her name so from today, the house is hers.

Suddenly the papers fall down, Ishani picked them up but, RV threw the file, took beer and threw it on them. Ishani got worried, and then RV threw matchstick on them.

Ranveer Breaks all His Promises Given to Ishani 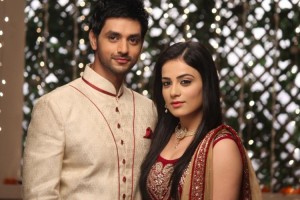 Meri Aashiqui Tum Se Hi Ranveer took Ishani’s hand and said, he wants to end the relation with her then he took anti-circles with her, by way of each circle he broke his promises and as he approached the mangal sootar off her neck, she shouted no. She said that, it is a sign of her married life.

After than Ranveer said God has given him second life, but he would never love her again. His wife went to Ravan herself. So there will be a new Ramain, where he will be the Ram and he will be Ravan.

Today we will see what happens when Ishani finds ranveer with other woman in the bedroom.