138th episode of Meri Aashiqui Tum Se Hi: Ishani said Ranveer (Shakti Arora) that if marriages were broken by taking anti circles, the world would have lost this marriage relationship. However, she is still his wife after their anti circles as well and so she has full right on him and this house.

In the Party, Chaitali got emotional and tried to convince Sharman to marry Ritika. Baa came there at the same time and said him that, she (Baa) always thought her mother to be a selfish person but first time she is thinking about her family, so he must convince Ritika to marry him.

Ishani asked RV that, he must know the truth of that night. She said, she wanted to know the reality of her father’s death case that’s why she went to take the proof with chirag. But, now she knows that it was all drama. He was trying to give bruises on her body. But she ran away, she got to know that she was wrong. She knew that how much she loves him (RV).And she told the complete story of that night.

On the other side, Meri Aashiqui Tum Se Hi Amba told Ritika that, after Ishani’s faithlessness, RV has stopped trusting people. But, Ritika assured her (Amba) not to worry about him. 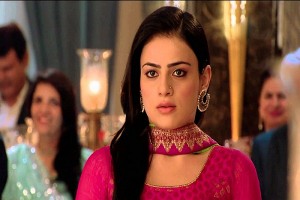 Here Ritika’s car doesn’t start and thus Chirag asked her for help, she ignored him but he insisted her. Seeing that Sharman came there and beaten Chirag.

Will Chirag be Success in his Plan against Ranveer?

Chirag sat in car and made a plan against RV. Then he called Rishi to meet him at the construction site.

On the other side, RV brought a girl with him. Ishaani asked him, what she is doing here. RV said this is his house. But Ishnai didn’t liked that. She lighted a matchstick and burned the bed. The girl shouted, the family member came up.

Bollywood Actress ‘Sridevi’ to Work with Husband in her Next Movie

What! Rekha and Amitabh Bachchan not Together in Shamitabh?