The annual Ganesh Visarjan at R.K. Studios is synonymous to joyous atmosphere. But something else happened this time. Randhir Kapoor was seen slapping the media persons while Rishi Kapoor was misbehaving and pushing his fans. 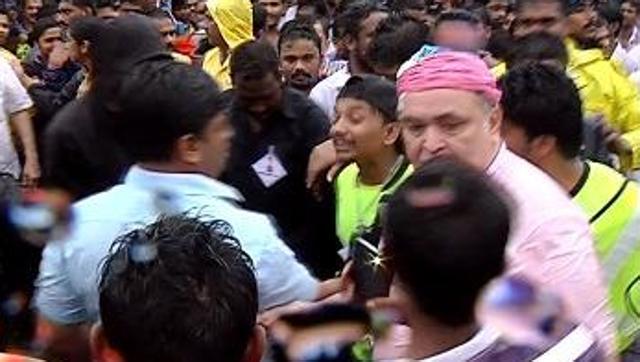 Kapoors welcome Bappa every year at the R.K. Studios and media covers this procession. This year also the function had a joyous beginning. Kapoors were on their way to the sea near Shivaji Park, Dadar situated in Central Mumbai for Bappa’s immersion. Just then the hot headed Rishi Kapoor lost his temper in the event.

Rishi Kapoor has always been known for his straightforwardness and short temper. Yesterday’s incident was again an example of his attributes. When a reporter approached Randhir Kapoor for an audio byte, he slapped him. On the other hand, when another man approached Rishi Kapoor for a selfie, he misbehaved and pushed him back. The media was in huge shock with this happening. 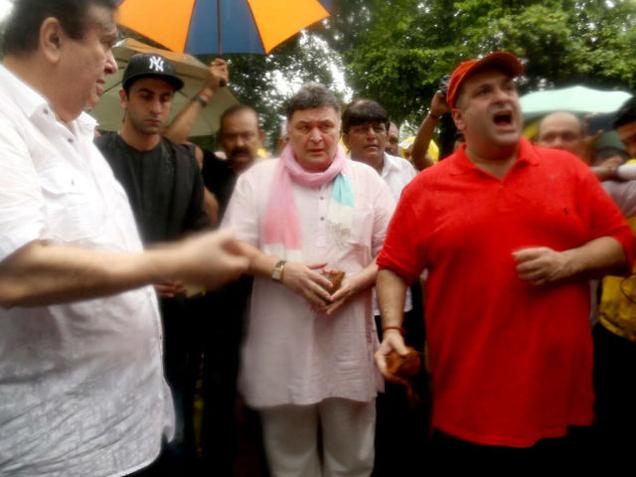 They walked almost 4 kms for the visarjan. The long walk gathered the attention of many passersby who climbed all the barricades to get a glimpse of the stars. To make matters worse, there were others too who joined them with their Ganpati idols. This led to a lot of commotion and on top of everything it was raining.

After this, news hiked up in the media. Rishi Kapoor has something to say on his front.

“This evening there was heavy rainfall. There were so many people and so much media. We have not called them…. It is impossible when there is so much rain and public (to not lose your temper). When we are respecting God, these small time journalists poke the damn camera on your face. Because Ranbir was also there everybody got so excited. I don’t blame them, but they misbehaved with me. If I have indeed slapped them why don’t you show the clip of me slapping? I was behaving like the Mumbai police, trying to monitor the situation. They have misinterpreted it that I misbehaved with the media! You come because you know we are important and you are giving me bull** saying that I have hit you?”

Rishi Kapoor also mentioned that their family has been following this Ganpati tradition not for publicity but for their culture running past 64 years. They do not invite anybody for the coverage. He’s is bound to get angry when the cameraman poses the camera in front of his face while he is performing the rituals but he did not slap anyone.