Om Swami, who made it to the headlines in the Bigg Boss house, is once again in the news for some creepy reasons. The self-proclaimed Godman’s lovey - dovey moments between the contestants really annoyed in the show. He created the ruckus during his participation in the show and disrespected women in the house too.

Well, it seems that this was not just enough for him, he has crossed all his limits of being called the nasty in a way. The video of him teaching yoga to a topless girl is going viral. A few days back, one more video went viral where a teen was seen giving him a lap dance. 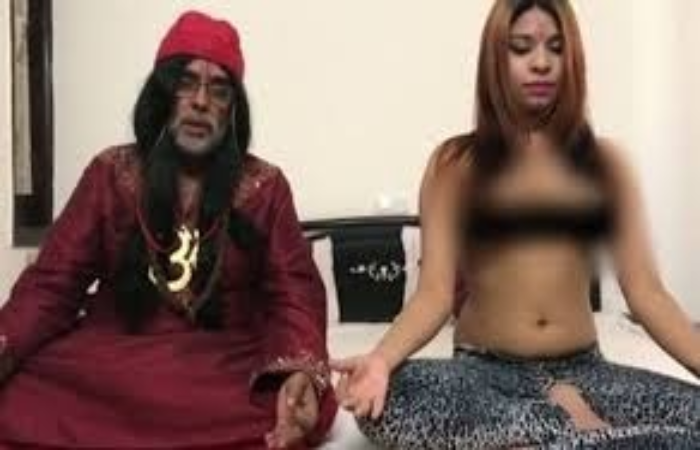 He has been in the news since long, even it was headlined that Om Swami started dating Priyanka Jagga (one of the Bigg Boss contestant). Priyanka said –

Oh God! I don't know what do I do of such news that keeps coming in. Why will I want to dance with an elderly man. I might as well dance with Hrithik Roshan. And Plus I had already decided to not be a part of Television anymore and had stated the same earlier too. My focus is Bollywood. I have children and a husband and am happy with my family. Why will I even want to be to do all this. I am not interested in dancing in any competition. Its disgusting how people come up with such fake news.”

In this video, you can see Om Swami sitting on the bed with a girl, yes did you remember the girl?

She is the same girl who was seen in the previous video (lap dance) and this time he is giving yoga lesson to his fan. The girl is seen wearing topless with just a yoga pant and covered her Ni***** with a tape.

After the show, one would have wondered to see Om Swami as a normal person but apparently not, he has been giving some nasty reasons to be in the news. Uummm…..WTF is that!!

What do you have to say on Om Swami’s shocking acts??

Salman’s Bodyguard Shera Is Earning Too Much & This Amount Is Shocking!

Rumors Is It – Sara Ali Khan To Romance With Aayush Sharma?