Neha Marda, who is a well known face of Indian TV serials, will soon going to start her career in Bollywood with her upcoming debut. She is currently plays Mohit Malik’s wife’s character in the Zee TV Serial ‘Doli Armaanon ki’.

In an interview she confirmed that "Very soon, you're going to see me in Bollywood. Once I sign the contract, I'll talk about it,"

Neha Marda Has a Dream to Work with Dabang Khan Salman

You may also like: Balika Vadhu Bid Adieu Shiv Aka Siddharth Shukla!

She is a little mythical about revealing details of the film-

“A lot of times it has happened that I discuss these things with people and then things just get stuck. I'm just waiting to sign it (the film's contract) and then I'll talk about it," 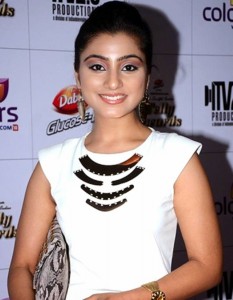 "My first choice for a director to work with would be Raju Hiraniji and for an actor, undoubtedly Salman Khan," she added.

Neha Marda comes to fame from the superhit show of Colors ‘Balika Vadhu’, in the character of ‘Gehna’.

Get more updates about Neha Marda from India TV Serial.