Bollywood actress Nargis Fakhri is resady to make her debut in Hollywood with the movie ‘SPY’ featuring Melissa McCarthy. The first theatrical Spy movie trailer was released by the makers of the action comedy film on Wednesday. The trailer showcased the actress Nargis for hardly 10 seconds.

The sexy B-Town actress ‘Nargis’ plays the role of a secret agent in the movie and can be seen in the promos fighting with the queen of comedy and Hollywood actress ‘Melissa McCarthy’.

The Actress Nargis Fakhri’s Debut in Hollywood With ‘Spy’

The 2 min theatrical trailer of movie ‘Spy ‘gives us a glimpse of Melissa McCarthy as Susan Cooper a CIA analyst, who gets an opportunity to be in the field with the agents, played by Jude Law and Jason Statham. The Hollywood actor Rose Byrne plays the role of rogue.

You may also like: Birthday Wishes: Is Uday Chopra Still Special for Nargis Fakhri? 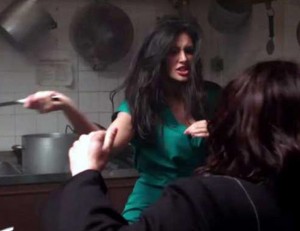 The Tinsel Town movie ‘Spy’ is written and directed by Paul Feig fame director of 'The Heat' and 'Bridesmaids', and produced by Fox Star Studios. It is an American comedy action movie scheduled to be released in May 2015.

Can You Spot B-Town Actress Nargis Fakhri in This 2 Min Trailer?

The beautiful Nargis Fakhri made her debut in B-Town with the charming actor Ranbir Kapoor in the movie ‘Rockstar’, then she was seen in ‘Madras Cafe'. Whereas the Hollywood movie ‘Spy’ may, be a good chance for her to show her acting talent to the western spectators. Well we just hope that the film will amaze the audience.