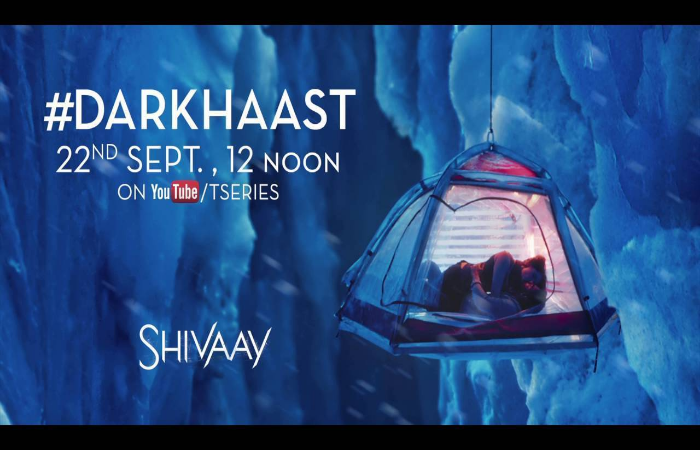 The makers of Shivaay have just released another track from the film today which is entitled as Darkhaast.

Darkhaast is a romantic song and its obvious Arijit Singh was approached for this soulful track.

As the first song which was released was the title track which only focused on the character of Ajay Devgn, but this track has shown the romantic sides of the stars Erica Kaar and Ajay Devgn.

It’s been a while we have watched Ajay Devgn romancing on screen, but this track will surely make you remember his movie Pyaar to Hona Hi Tha with his wife Kajol.

Along with Arijit Singh, Sunidhi Chauhan has lent her voice for Erica.

Erica and Ajay Go Romantic as the Song Progress

Darkhaast is an excellent track which is shot in the icy mountains and has a proper storyline and not just looks like the music videos. Apart from this romantic track, the kiss between Ajay Devgn and Erica is what keep us pause watching the video.

This is for the first time Ajay Devgn is kissing on screen in his 25 years of career. Wow! Ajay has done a commendable job and the kiss goes in sync as the song process.

Darkhaast is composed by Mithoon. Of course, the song is going to be a list at the top as the excellent singer and composer have been signed for this track.

But what about Ajay Devgn intimate scenes guys? Should he continue with the intimate scenes? Drop your comments below. Hope Kajol doesn’t get jealous of Erica…

Fawad Khan’s next film will be opposite to Salman Khan