When the news ‘Kanika Maheshwari pregnancy’ got viral all her fans were wondering that she would not continue with Diya Aur Baati Hum and she will take a break from her hectic schedules. But, Meenakshi stated that

“I am pregnant, it’s a reason to rejoice. I am not unwell, why should I quit the show? My co-actors and the unit are taking special care of me. Also, Ankur has moved to Mumbai to be with me.”

After getting this joyful news, director and cast of Diya Aur Baati Hum serial decided to do the same with the script of the serial and the track on the show has been tweaked to accommodate Kanika Maheshwari's pregnancy. 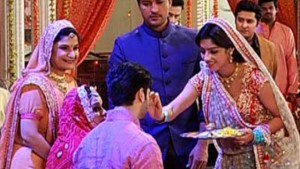 You may also like: Diya Aur Baati Hum – About The Show

Kanika Maheshwar (Meenakshi) said, ”When I told my director about being pregnant in real life, he thought of introducing a similar track on the show. Thankfully, I will be able to work and won’t have to quit the show. My co-actors plan to make that day special for me, almost like my real godh-bharai (baby shower), by giving me gifts. I’m very excited and looking forward to it because in our family, we don’t have the godh-bharai custom.”

Where Vikram’s (Karan Goddwani) wife Meenakshi is too excited about her baby shower (godh bharai), on the other hand Diya Aur Baati Hum cast (leads) Sandhya (Deepika Singh) and Suraj (Anas Rashid) are still ignoring each other and Bhabho is continuously trying to reunite them again.