Akshat Verma directs a 16 minutes short film on a single incident in the lives of Pandavas, Draupadi, and Kunti from Mahabharata. 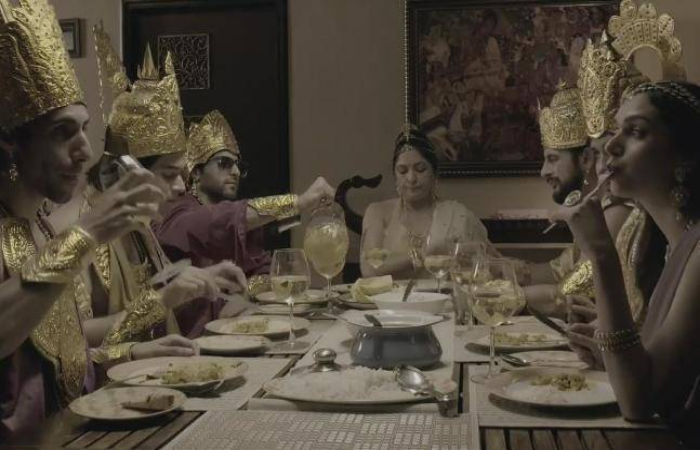 Arjun wins Draupadi at her sway-amber and brings her at home introduces to mother Kunti - "Ma, Draupadi...Draupadi, meet ma." Kunti and Ma she is Draupadi” and the story goes on Kunti order Arjuna to share Draupadi with his four brothers.

And the rest film is all about how the Arjun coming up to term with his bro’s about sharing Draupadi what is ‘rightfully ‘his.

The film is very hilarious with modern tadkaa. The dialogues are very cool that you will love watching the film.

Mama’s Boys is a short film viral on the internet that tells about the complicated marital status of Pandavas and Draupadi in a very modern way, with shattering effects.

Neena Gupta as ‘Kunti’ is a typical Punjabi mother of 5 laddla Betas – Pandavas. Who keeps preparing tinda masala for his sons and lived happily.

The gorgeous diva of Bollywood playing the character of Draupadi the wife of five Pandavas. She was in mythology. But this modern Draupadi is a bit more open, she played seductive wife for all five husband. She serves nobody but finds her own advantage.

Arjun (Amol Parashar) who is very responsible, Akshay Oberoi as Yudhishthir who play gambling and keep borrowing money from others he wears black sunglass a look perfect in this getup. Nakul and Sahdev are the two brothers are the gay designer and is a dissolute perma-sunglassed Yudhishthir, borrowing from his brother to keep gambling. Nakul and Sahdev, gay designer and Vivaan Shah as Bheem.

The film features Late Razak Khan. who plays Shakuni mama. Good, to see him play as Shakuni...you can pay tribute to the actor by watch 16 minutes from your day, watching short film Mama’s Boys

Before launching his upcoming film Kala Kanti on big screen Akshat Verma, the director is taking the acidic check. Film is a directorial debut with Saif Ali Khan, he gives us a short film - Mama's Boys.

Watch the amazing trendy Mahabharata and leave your comments below.

Kajol Sings Baby Doll and It Is FAR better than Kanika Kapoor!!

You Can’t Miss This Dance No. Lak Hilaade by Raftaar & Manj Musik