The gorgeous actress ‘Kriti Sanon’ made her debut in the industry with the film ‘Heropanti’ opposite Tiger Shroff. The actress, who got good reviews from critics as well as from audience, has bagged her next flick ‘Singh Is Bling’ opposite Akshay Kumar.

According to rumors, the b-Town actress Kriti Sanon has been learning different dance forms such as Salsa and Ballroom dance. As the actress plays the role of a dancer in the forthcoming movie ‘Singh Is Bling’. 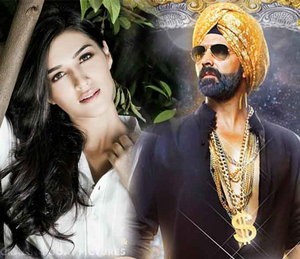 According to the makers of the film, Kriti Sanon matched the character better than other actresses because she is slim, tall, graceful as well as a dancer. As stated in earlier reports, the makers considered Kareena Kapoor Khan and Katrina Kaif for this upcoming project. But it seems that the newbie hotty has left the leading ladies behind by bagging the role.

You may also like: Aankhen 2: John Abraham Snatches Another Role from Akshay Kumar

Latest buzz suggest that Kriti Sanon and Akshay Kumar starrer upcoming flick ‘Singh Is Bling’ would release on July 31. But as Karan Johar’s flick ‘Brothers’ would also hit the theaters on the same date thus the release of ‘Singh Is Bling’ has been delayed.

Akshay Kumar’s ‘Singh Is Bling’ Dragged to Release Next Year

The movie was first re-scheduled to release on 2nd October 2015 i.e. on the upcoming ‘Gandhi Jayanti’. But according to reports, Akshay Kumar starrer movie ‘Singh Is Bling’ has again been delayed for the next year. The film will be directed by Prabhu Dheva and co-produced by Grazing Goat Pictures. Grazing Goat Pictures is co-founded by Ashvini Yardi and Akshay Kumar.

Ashvini Yardi stated that- “This film is going to be an outright entertainer and Akshay’s character in the film will leave an everlasting impression on the viewers. There couldn't have been a better title for the film and we are extremely excited that Prabhudheva will be directing Grazing Goat Pictures' next Hindi feature film."