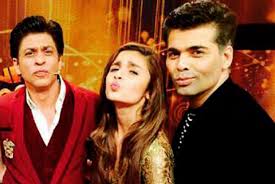 Opening the first two seasons of Koffee with Karan with KJo’s favourite ladies Kajol and Rani Mukherji, Shahrukh will be opening this season with Alia Bhatt for promoting the upcoming film Dear Zindagi.

Presently, Shahrukh Khan is shooting Imtiaz Ali’s The Ring with Anushka Sharma in Europe. The shoot for this episode shall be done after his tour. It’s been a long time Shahrukh was seen on the show since he did not appear in the last season.

SRK and Alia Replace Fawad for the First Episode

Earlier, Fawad Khan was supposedly to feature in the first season but since the rising tensions between the two countries India and Pakistan, Fawad has left for his nation and has no current plans to return India. He wants to spend time with his wife who is expecting their second child.

Fawad Khan would also not be seen promoting Ae Dil Hai Mushkil, directed by Karan Johar which is due for its release this Diwali.

Recommended: Karan Johar opens up about his battle with Depression for 2 years

As said, the replacement decision took place only because of the MNS (Maharashtra Navnirman Sena) controversy to threaten the Pakistani actors to leave within 48 hours. KJo had to opt for some alternative for Fawad and thus he chose Shahrukh Khan and Alia Bhatt for the inaugural session of the fifth season of Koffee with Karan.

Season 5 is likely to go on air in October.

Sonam Kapoor Opens Up! She Was Called “Kaali” at a Family Gathering